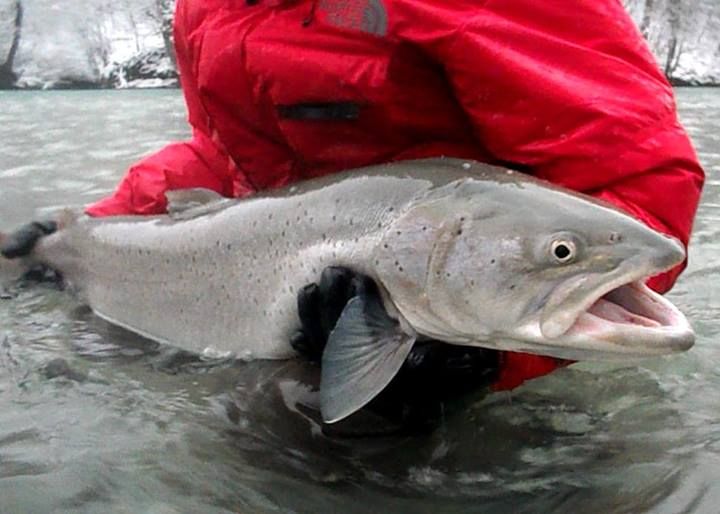 Being a fishing guide, I like Danube salmon fishing mostly. It is the  biggest challenge for all fishermen.  People often say that hucho hucho- Danube salmon is a fish of thousand casts.  I would like to say that was true but if you are not experienced enough and you don’t even have much luck, you can never catch this gorgeous fish. Let’s make it clear: Danube salmon fishing is different than any other. Yes ,it’s true , it is the  closest relative to mongolian taimen and it is also true that in Mongolia  it is no big deal to catch taimen. But Danube salmon is a completely differrent story. It’s nothing like it. For that fish everything must be perfect. Very important is that you get the best conditions. Water level must be little higher, air preasure must be low or getting lower and lower, rain or snow: these conditions are the best time to do it. You should not make much noise in the water  and you also must choose the  right lure for differrent conditions on the water.

At the end of January I was guiding 2 fishermen from Germany.  We were already fishing for two days at the  Ljubljanica river but had no luck. We caught  only two brownies around 50cm there. On the third day we went on the Sava river– managed by fishing family Tržič. We were casting and casting like crazy, tried everything: in shallow, deep pools, between the rocks, we also we tried in the river canyon. We had cloudy weather, low air pressure , everything was just perfect for hucho strike, but nothing. At the end of the day I said to Martin: don’t worry, we will catch some  tommorow because the snow is forecasted.

So on the  4th day we started early. It was 6.00 in the morning when we started casting big wobblers. It was just like the  day before : a lot of work with casting and snagging the lures in the rocks and fallen trees, walking trough thickly overgrown embankment of the river. We were doing really hard work. That kind of fishing is just for the most persistant fishermen. It was 10.00 in the morning when it started to snow. We were still without any strike of hucho. We had the best conditions and still no strike. It was snowing so hard that all the roads were completely covered with at least 20cm of snow. We were lucky that we took Jeep 4X4.  It was almost 17.00 and it was getting dark. Martin and me were joking at river bank and telling some funny stories, when Martin said to me: » Well , my last chance. I will just try  the last 3 casts over there, near the big rock in the river…«

He made 2 casts and nothing, I was nearly leaving the spot when i heard him  screaming: » Hucho , hucho, hucho!!! What a luck he had! I ran downstream to help him, but I left the big net in the car. So I waited till hucho was in the shallow then  jumped and »tailed« a big hucho for the tail. After that we took some photos and videos. What a great fish it was. It was just incredible and perfect. Caught on a last cast!!!

So my friends…When you go fishing for huchen, always repeat in your head: » Never give up«.

One thought on “Fishing for Huchen (Danube salmon or hucho, hucho) in Slovenia in January”