Huchen, the king of the rivers, as we like to call it, is at the top of the food chain in the grayling and barbel area of some rivers of the Danube basin. In English, they call him also the danube salmon. How much is it actually related to salmon and where, besides native rivers, can we still catch it?

Make no mistake: The biology of the huchen is quite complex, so this text only wants to outline some important facts that will be of interest to the huchen-anglers and others interested in freshwater fish species. Huchen is an endemic fish of the Danube basin, one of Slovenian largest salmonids, a legendary fish that has, for decades, not to say centuries, aroused the imagination of fishermen and inspired literature. Huchen is also the fish on which spears break between environmentalists and proponents of the construction of additional hydropower plants.

Prevalence of the species

“Huchen is king, but he does not have a kingdom to live in,” wrote Prof. dr. Albert Göttle, President of the Land Fisheries Association of Bavaria. The comment clearly shows that by interfering with watercourses, we are seriously limiting its habitat. This is, as mentioned earlier, restricted to some rivers of the Danube basin. It is present not only in Slovenia but also in Germany, Austria, Slovakia, Poland, Croatia, Bosnia, Serbia, Montenegro, the Czech Republic, Hungary, Romania and Ukraine, but only partially.

In Germany, a huchen lives in Bavaria. Good self-sustaining populations are in the Regen (upstream), Ilz, Wertach, Ammer and Isar watercourses. In Austria, there are good populations in the Gail, Mur (upper stream), Enns, Ybbs and Pielach sections. One of the strongest huchen population is in the Sava, Slovenia. Other Slovene rivers, where huchen populations are good, are Ljubljanica, Sava Bohinjka, Kolpa, Mirna, Mura, Savinja, Sora, Krka and Kamniška Bistrica. 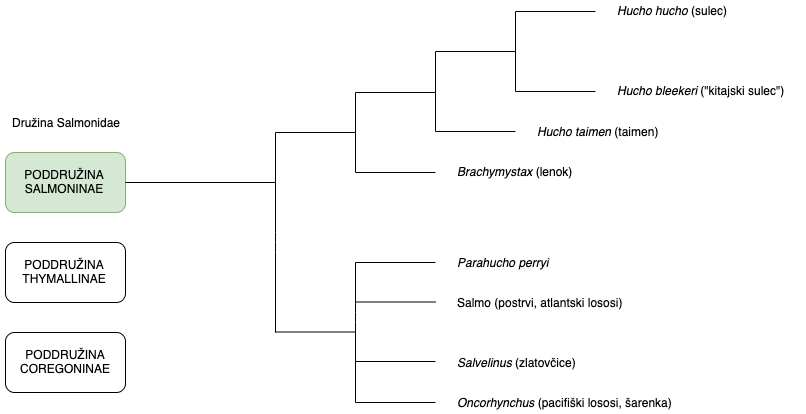 As the diagram above shows, the Hucho hucho is biologically close to the “Chinese huchen”, taimen, and closer to lenok than to Atlantic and Pacific salmon. The name “Danube salmon” is therefore only approximate. The scheme is also interesting because of the transparency of the links between huchen, trout and rainbow trout.