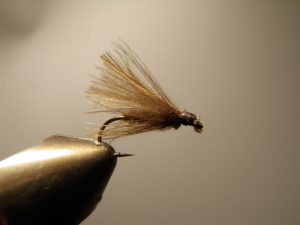 F-fly is a world-renowned fly that has its origins in the western part of Slovenia, by the Soča river and its tributaries. F-fly is Fratnik fly, meaning the surname of its “inventor”, Marjan Fratnik, Slovenian fly fisherman. F-fly should be in every fly fisherman’s fly box due to several important reasons:

There are many different possible ways how to tie this wonderful fly, but only one is an original. Take the hook, fix it in the vice, take black silk thread and make a few wraps around the shank of the hook. Take a nice CDC feather and pull out a chunk of fibres. Set them just behind the hook eye and fix them with a few turns of silk thread. That’s it! Originally, F-fly does not have a tail and body is made of silk thread only.

One thought on “F-fly in every fly box”

This site uses Akismet to reduce spam. Learn how your comment data is processed.