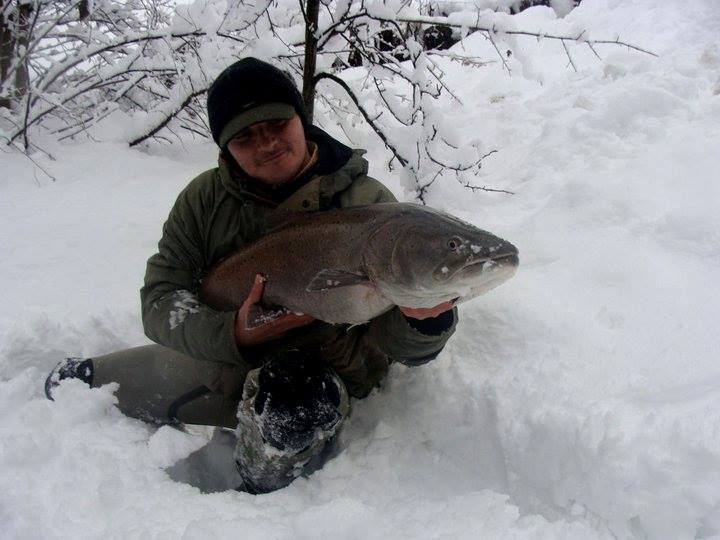 In the 18th century it was said that boy became a man when he caught his first hucho hucho- Danube salmon. Nowadays they say man is not a man without catching one of those giants, but before we go on let’s check the facts.

Hucho belongs to large salmonid family from Eurasia. The specie is primarily Asian; of the five subspecies in the genus, only H. hucho (Huchen trout or Danube salmon) and H. taimen (taimen) are native to Europe. Hucho hucho is the closest relative of hucho taimen which can be found in Mongolia and Siberia. Some sources name the fish huchen which is the same as Danube salmon or his Latin name hucho hucho. The huchen /ˈhuːkən/ or Danube salmon (Hucho hucho) is a large specie of freshwater fish in the salmon family of order Salmoniformes.
Hucho can reach 150cm in length and more than 50 kg in weight but these specimens are very rare. The huchen that holds the world record in weight was 58 kilograms (128 lb) heavy, caught by Bosnian angler Halil Sofradžija at the Dragojevića Rapids on the Drina river, near the town of Ustikolina in Bosnia and Herzegovina in January 1938. Average catch is between 80 and 100cm. Hucho longer than 110 cm is a real trophy, hucho over 120cm is a real giant.

Danube salmons with weight from 1 to 3 kg grow very fast, use a lot of food, are always on the lookout in the shallows and there is no wonder that they grab the bait. Larger adult salmons need less food and are mostly hiding. Only once a day; in the early hours of the morining or later when the darkness falls these fish look out for their prey (nase or chub and a bullhead catfish for a dessert). Huchen hides mostly in the deep pools or where the pool becomes quicker , hidden between the rocks and fallen trees in the river … Danube salmon shows up only when the conditions are right . Danube salmons that weigh 5 kg make considerable noise in the water when hunting for prey and the fisherman can hear huchen hunt…

Fishing for hucho is only for skilled fishermen who wait for best conditions on the water and make a plan how to catch those giants. Here in Slovenia we have rivers like the Sava river , the Ljubljanica river, the Savinja river and others that have quite large population of Danube salmon. But anyway, fishing for that fish is successful only when all the conditions are just perfect. The best conditions are when the weather is rapidly changing, for example from sunny weather to rain or snow, when water level is rising rapidly, when air pressure is low or getting lower and lower etc.

Searching for that fish with your flyrod or spinnrod is a great challenge and at the same time a great adventure. But youhave to cast every single time as it is “the cast” if you want to catch the “king” of river – hucho hucho.