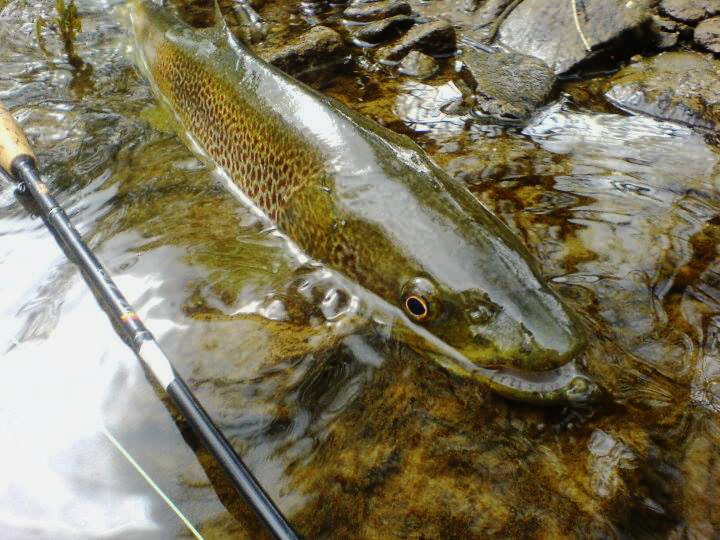 While we are all in the expentation of fly fishing season’s start I would like to describe you the river mostly known by the fact that it made ones of the most beautiful caves in the world: the caves Škocjanske jame. I’m talking about the river Reka, managed by the Fishing family Bistrica form Ilirska Bistrica.

The river Reka flows into the Adriatic sea and it’s a typical carst river with torrential characteristics and numerous tributaries, which come down from forest Snežniški gozd and Brkini-when the rains are heavy . The flow of the river varies between 0,5 m3/s in dry season and 300 m3/s in wet season, especially in spring and autumn months. Because the Reka is a small river with a narrow channel, the most suitable time for fishing in it is when the flow doesn’t exceed 10 m3/s. The banks of the river are abundant with luscious vegetation and trees. Its channel varies. It’s made out of rapids, long and deep pools, dams, water barriers of saws and mills, which were used in the old days.

The river Reka is a salmonids-cyprinids mixed district. In its deeper pools we can find nice specimens of indigenous marble trouts, wild carps and pikes. However in its rapids and shallow parts we can also catch some nice specimes of brown trouts, hybrids, rainbow trouts, chubs and barbels. The fish in the Reka are known to be very timid and cautious, so in order to catch them you have to have a lot of patience and persistence. A lot of times the difference betwen catching a fish or not is due to standing or kneeling in the water or just by positioning your leg in or out of the water.

The fly fishing season starts on the 1st of March and ends on the 31st of October. In the begining of the season the fishing success is based on the quantity of water flow and potential »snowy water« which comes form melting snow in gorest Snežnišk igozd (which can have a very bad impact on fishing). Nevertheless in the begining of the season the most suitable flies are streamers (olive and darker colours), larvae and nymphs. The period between April and October can prove to be quite an experience. In this time an indispensable set of the flies must contain: nymphs, dry flies, ants, may flies and CDC elks.

According to the size of the fly comes also the size and type of the rod which should be number #6 and down (the same goes for fly line), the length of the rod should also be around 9 ft. In the dry season it’s good to have fluorocarbon line or very fine line (0,14mm or less).